Information about the storage

JSC „Conexus Baltic Grid” structure includes Inčukalns underground gas storage (Inčukalns UGS), which is the only functional storage in the Baltic countries, which ensures the stability of regional gas supply.

During the summer season, when consumption of natural gas in the region is several times lower than in the cold season, natural gas is pumped to the storage, so that in heating season it could be supplied to customers in Latvia, Estonia, Lithuania and Finland.

Thanks to the storage, natural gas supply stability and power for Latvian customers are independent from other countries demands, because in heating season, they fully receive natural gas from Inčukalns UGS.

In case of rising consumption of natural gas in the region, Inčukalns UGS capacity can be increased up to 3.2 billion cubic meters of active natural gas, which will fully ensure Latvia’s and the nearby region needs for fuel.

Latvia has a unique, concentrated geological structure, which allows to create natural gas storages at least in 11 locations, with a total capacity of up to 50 billion cubic meters. That is about 10% of the annual consumption of the European Union and about the same as the total storage capacity across the European Union. Storage is possible because, in the deeps of Latvian soil there is a layer of porous sandstone, which has good storage properties and which is coated with gas-tight rock layers, also these geological structures are placed at optimal level of 700-800 meters deep, allowing safe and cost-efficient storage of gas. 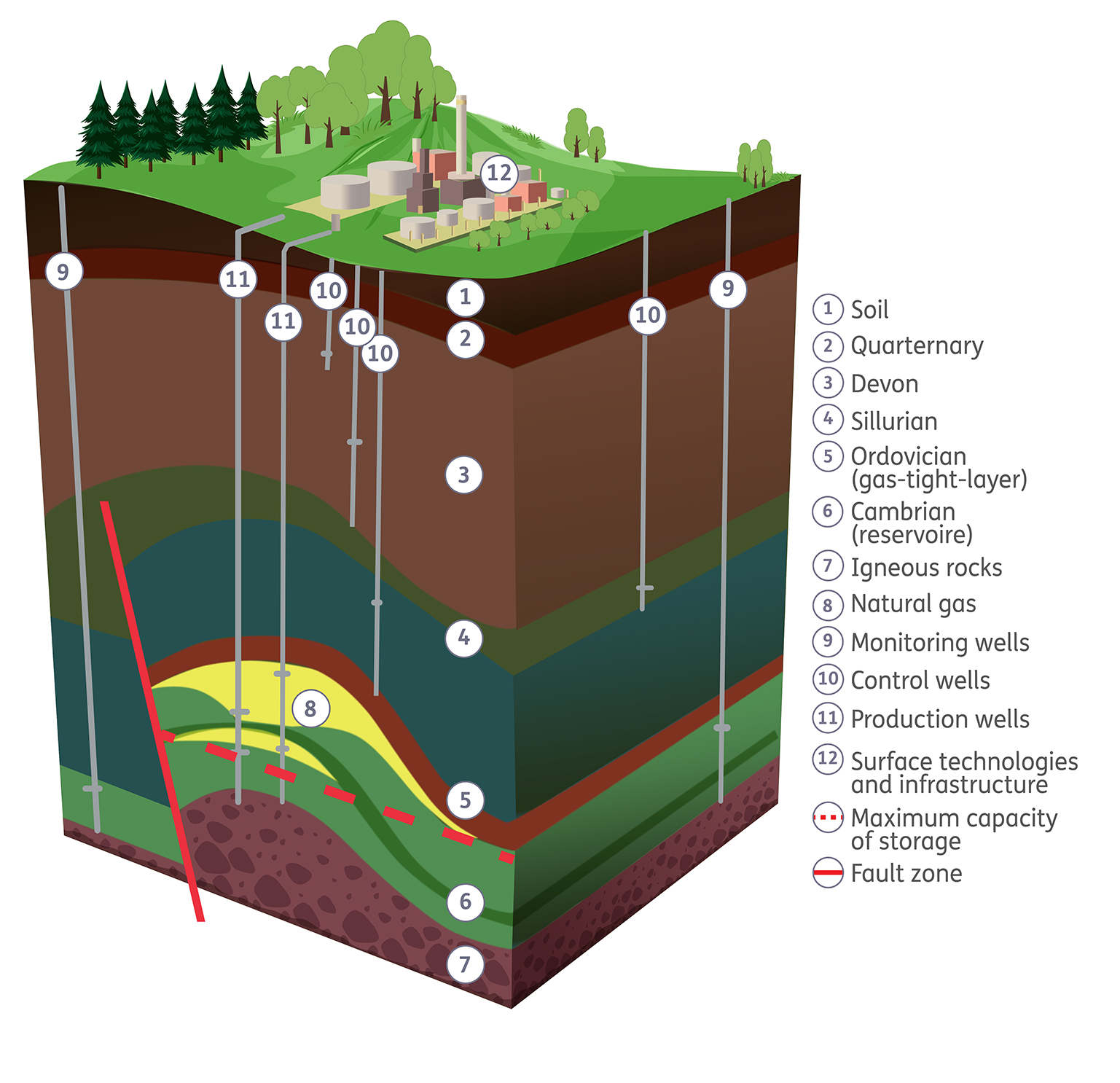 The occurrence of the Inčukalns underground gas storage.

The first geological works in Latvia were started in the 19th century, when underground layers were surveyed in Tsarist Russia, to understand if they hide any kind of natural wealth. After the World War 2, when Latvia was incorporated in the Soviet Union, the geological studies were resumed. This time there was a specific goal – to know whether Latvia and other Baltic countries soil contains oil or natural gas. In the early fifties, geologists came to the conclusion that the whole area – through the entire Baltic, up to Russia- on different depth (from 300 to 2200 m) has a stretch of porous sandstone layer called plast, which could contain natural gas or oil. Exercising strategic drillings, and creating precise geological maps, it was clarified that these rocks did not contain gas nor oil, but they were completely saturated with ground waters. The research results showed that at the depth of about 700 m the porous sandstone in the region of Inčukalns makes up something like a “hat”, which is covered with gas-tight rocks from both sides.

In the sixties Soviet Union emerged with a broad gas unification program, namely the related authorities, began to address the issues of constructing gas storages, so that in the summer, when the strain on the main gas pipeline is decreased significantly, they can pump volumes of the gas needed for the winter.

In the year of 1962 there was an order to launch a scientific and exploratory research on the possibility of constructing such storage in Inčukalns. In May 26, 1966, under orders of the former USSR Council of Ministers the construction of Inčukalns underground gas storage was started.On August 9, 1968, the construction was completed, and in the summer of the next year, it was pumped with 92 million cubic meters of gas, which at that time was received from Ukraine. The role of the storage increased considerably in 1972, when the construction of a pipeline that connected Latvia and western Siberia was completed.

Why is it that in such a wide region between the Baltic sea and Russia, where the porous sandstone is located, there are no other gas storages constructed? Geological research shows that exactly Latvia has appropriate geological structures for storages, because here above the porous sandstone, there are multiple locations coated with hermetic layers of rock, which create optimal conditions for the storage of natural gas. In addition, these structures are located at the optimal depth of 700-800m under the ground, for creating storages. In Estonia, they are much closer to the surface, approximately 300m under the ground, which in consideration of the high pressure of the gas is too shallow for safe storage. While in Lithuania and Russia, these layers are too deep – 2200-3000 m under the ground, so the construction of the storages is not cost efficient, because the deeper suction requires more pressure, so it has to consume more energy. It should be noted, that in Latvia these „hats”, under which you may store natural gas are based in 11 locations, and have a total capacity of more than 50 billion cubic meters.

Natural gas must be prepared for underground

Inčukalna UGS surface and underground equipment main task is to ensure suction and pumping of the natural gas from the layer of the porous sandstone. Before the natural gas enters the underground storage, it must be cleaned of impurities – junk solids and oil – and the amount of suctioned fuel is determined. Next the natural gas „goes” to the compressor facility, where its pressure is increased from the existing 35 bar up to a maximum of 105 bar, since that’s how much you need to deliver the gas to the depth of 700 m. The compression process is served by 6 motor compressor units, with a total power capacity of 34 MW. The increase of pressure is a three step process, since it heats up during the procedure. In between the compression steps, the gas is cooled to the room temperature in special cooling devices. When the required pressure is reached, the cool refrigerated natural gas, is delivered into three collection points. In there it is divided into several smaller streams for each drilling hole and then goes further down the pipes, flowing through the clay rocks, until it has reached its destination – the porous sandstone. In autumn and winter, when it’s needed to pump out the gas from the underground storage, the taps that control pressure are opened and because of the pressure the fuel flows up itself through the drilled holes. On the surface the natural gas flows into collection points, its pressure is decreased, but after that it travels to drying and filtering facilities, where it is purified from the underground moisture and impurities. In the end the amount of pumped natural gas is determined and it ends up in the main gas line, where its journey to the customers starts.

The storage is filled every summer

Inčukalns UGS is pumping natural gas in summer. As you know, natural gas is mostly used for heating, so most of its sales are in autumn and winter.

The storage is environmentally friendly

Western experts have recognized that Inčukalns USG from the technological and protection point of view is on a high professional level. Great attention is given to Inčukalns UGS ecological condition checks. Research is made constantly about the ecological condition of the storage and its surroundings. The main part of the research is the possibility of the natural gas interactions with drinking water in the storage area. Scientific research shows that outside the porous sandstone, methane which is the main ingredient of the natural gas has not been found. So as the layers of drinking water are well above the layers of the natural gas containing plast layer, the drinking water in the surrounding storage area corresponds to accepted norms. Inčukalns UGS territory also has been confirmed to not have any other harmful effects on the environment. Cooperation with health protection authorities shows that neither Inčukalns UGS workers, nor the surrounding village inhabitants have any specific health problems. The air above the storage corresponds to accepted norms too. To ensure the sustainability of the storage and the organization, and the environmentally friendly development, JSC “Conexus Baltic Grid” has implemented Inčukalns UGS management system and the storage has received ISO: 14001:2004 certificate. With the help of environmental management system, a closer link is maintained between the organization professionals, local government, public authorities and the public on the topic of environmental issues. In addition, Inčukalns UGS implements a protection systems management standard LVS OHSAS 18001:2007, which proves that in this area the processes going on in the storage are going in tradition of the best of European standards.